Metal, Punk Or Offbeat: Allentown Businesses Give The Neighborhood A Distinct Identity – WESA.fm

Metal, Punk Or Offbeat: Allentown Businesses Give The Neighborhood A Distinct Identity – WESA.fm

Metal, Punk Or Offbeat: Allentown Businesses Give The Neighborhood A Distinct Identity 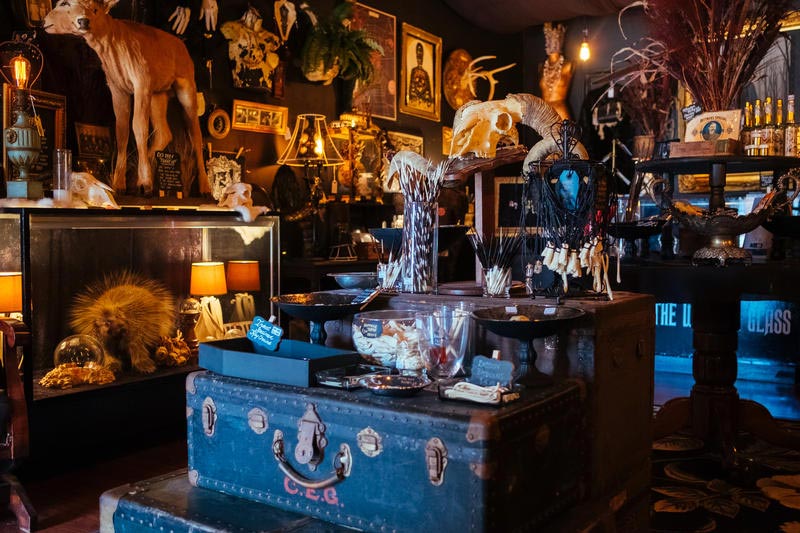 The interior of The Weeping Glass, which opened in Allentown in 2017. The oddities shop features taxidermied porcupines and otters alongside antique lithographs. The store is one of a crop of new businesses revitalizing the hilltop neighborhood.

JARED MURPHY / 90.5 WESA
—-
In Pittsburgh’s Allentown neighborhood, visitors can purchase a shark skull, read a recipe book of potions and catch a concert next to a mystical goat. The once-blue-collar neighborhood has been transformed into a center for creative entrepreneurship.

Allentown was annexed by the city of Pittsburgh in 1872 and home to European immigrants who found work at the nearby steel, iron and glass factories. Its Victorian commercial business district along Warrington Avenue is one of the city’s densest. 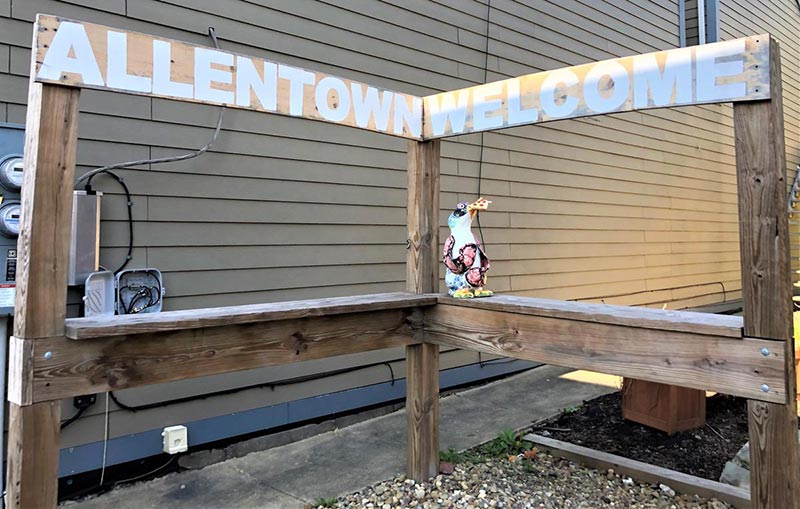 Signage greeting visitors and residents to Allentown features the neighborhood’s iconic penguin. The aquatic bird has become the mascot, of sorts, and can be seen at the welcome sign on Arlington and Warrington avenues.
CREDIT KATIE BLACKLEY / 90.5 WESA
—-

Five years ago, the neighborhood’s business district vacancy rate was 40 percent. Between 1950 and 2010, the population dropped by nearly 5,000 residents. Aaron Sukenik, executive director of the redevelopment group Hilltop Alliance, said the decline helped prompt the creation of a neighborhood plan.

“We looked to prioritize subsidizing and soliciting specific types of businesses for the main street,” Sukenik said. “What we’ve really focused on is, essentially, occupying and seeing reinvestment in the previously vacant properties.” 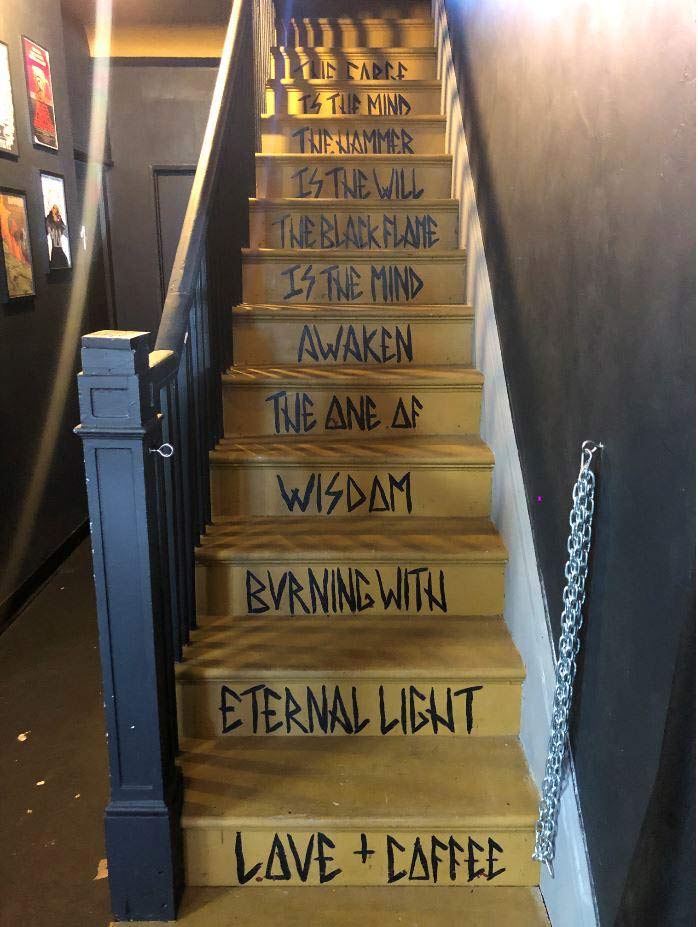 Black Forge Coffee House owner Ashley Bianca-Corts says the name “Black Forge” comes from poetry she was absorbing while considering opening a shop. The words of the poem are on the steps of Black Forge II, the coffee house she recently opened in McKees Rocks.
CREDIT KATIE BLACKLEY / 90.5 WESA
—-

The draw of the “odd”

Incentivized by rate abatement and business potential, Ashley Bianca-Corts decided it was time to pursue her dream of opening a music venue and coffee shop. The result was Black Forge Coffee House, a heavy-metal themed cafe along Arlington Avenue.

“At the time, there was nothing going on there that could bring people to the neighborhood,” Bianca-Corts said. “So we had to be really creative with what we wanted to do as part of our mission.”

Faced with the challenge of isolation on the hilltop, Black Forge owners knew the space had to stand out so customers would make the trek for a cappuccino. The shop is unlike most in Pittsburgh; a large anvil is fixed to the coffee bar and the walls are lined with artwork of monsters and dark deities. The cafe’s soundtrack is metal music; shredding guitars are met with the clink of espresso cups.

“It’s definitely different from the average coffee shop,” Bianca-Corts said. “We stay true to being this, underground, kind of, interesting coffee shop.” 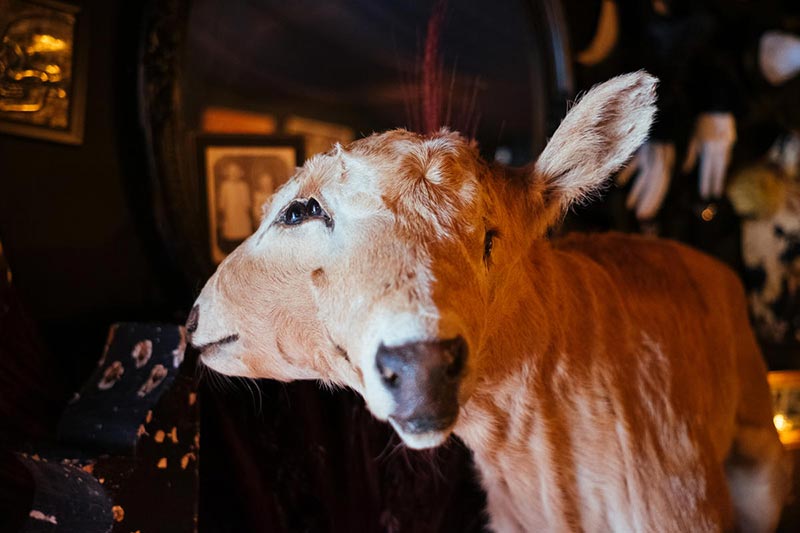 Dippy, the two-headed calf, is “not taxidermy magic,” according to Kelly Macabre Noir, but a naturally occurring anomaly. Cows reportedly don’t have the physical ability to carry two calves at once, so often the newborns have multiple hooves or, in this case, heads.
CREDIT JARED MURPHY / 90.5 WESA
—-

After watching the success of Black Forge, a pair known for their annual Morose & Macabre’s Atrocity Exhibition started to consider opening a brick-and-mortar shop of their own. Surrounded by a taxidermied two-headed calf and a vial of animal bones, Kelly Macabre Noir said she contacted Bianca-Corts about a business plan and soon after, rented a space for her shop The Weeping Glass in 2017 on Warrington Avenue.

“It was a great opportunity to try something out to see, you know, would a brick-and-mortar store actually work out?” Macabre Noir said. “These are young, weird, underground, interesting, unique businesses that can’t necessarily afford right off the bat, because they’re so niche, to be able to afford the $2,700 or $2,000 rent that’s going on in the up-and-coming neighborhoods.” 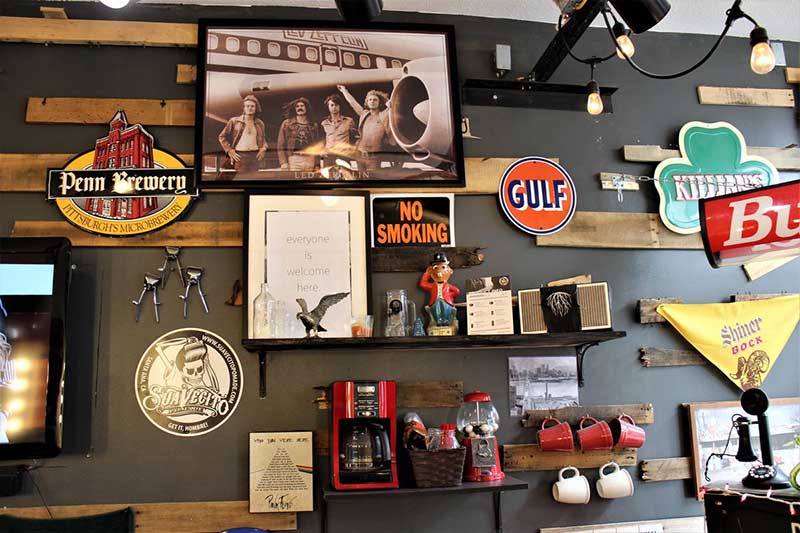 A wall of Dark Root Barbershop along Warrington Avenue features aluminum signs and framed black-and-white pictures of the owners’ favorite bands. It also has a sign that says “everyone is welcome here,” which Black Root’s Zach Miller says is to encourage the neighborhood’s “laid-back working class vibe” and make all clients feel at ease.
CREDIT KATIE BLACKLEY / 90.5 WESA
—-

Up-and-coming neighborhoods include places like Lawrenceville, which has experienced gentrification and rising rents in recent years. The affordability and creative opportunities in Allentown also attracted Dark Root Barbershop co-owners Ricky Dennis and Zach Miller. Both were working in the East End, but wanted to open their own place.

The barbershop is a reflection of Dennis’ and Miller’s personalities. Its walls are covered with antique gas station signs and old-fashioned barber tools.

Dark Root fits in well with its neighbor, The Weeping Glass, which Dennis and Miller said was a bonus to moving to the community. Dennis, who grew up in Allentown, said he’s glad to be a part of an emerging DIY (colloquially used to describe self-sufficiency and often tied to punk music and lifestyles) business collective.

“We’re not the same, but we have the same, almost aesthetic, the same vibe,” Dennis said. 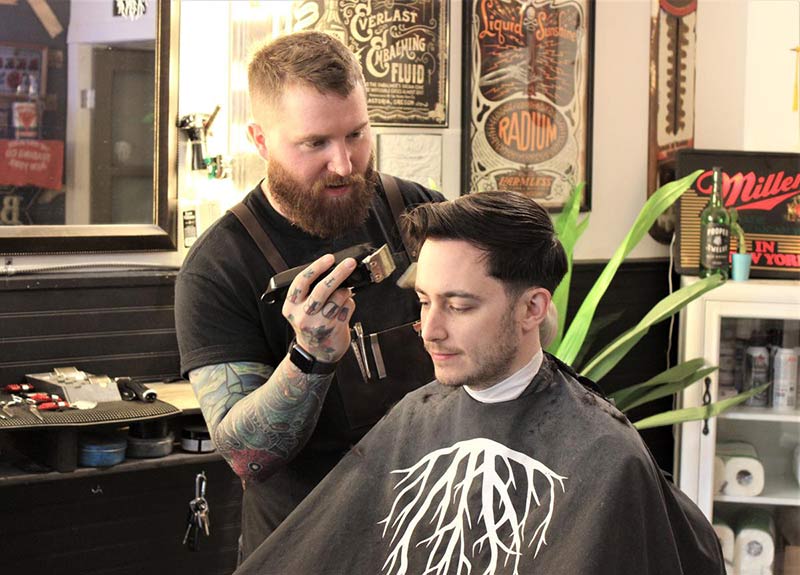 Dark Root’s Ricky Dennis shaves part of Logan Blizzard’s hair on Friday, Oct. 25, 2019. Dennis first met Blizzard while he was working in Lawrenceville and the two have kept in touch for haircuts since moving across the city to Allentown. “Everybody helps each other out up here,” Dennis says of the businesses in the neighborhood. “Nobody here is above anyone.”
CREDIT KATIE BLACKLEY / 90.5 WESA
—-

Brooks Criswell says when he and his partner first opened their punk-metal-vegan restaurant, Onion Maiden, Pittsburgh residents didn’t know where Allentown was located.

“A lot of them would pause and look at me funny and be like, ‘Oh, you mean like by Philly?’” Criswell said, referring to Allentown, Pa., nearly 300 miles east of Pittsburgh. “And I’d be like, ‘No, it’s a neighborhood here in Pittsburgh.’” 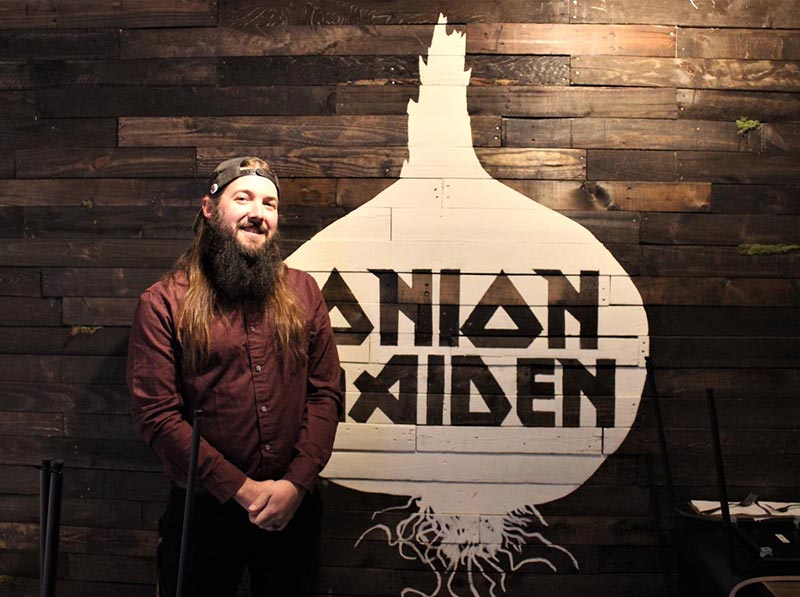 Brooks Criswell stands in front of the logo for Onion Maiden, a vegan metal-punk restaurant he runs with his business partners. Criswell says Allentown is being revitalized and the atmosphere is “exciting.” “Having so many unique types of businesses attracts people,” Criswell says.
CREDIT KATIE BLACKLEY / 90.5 WESA
—-

Criswell and his wife, Diana “Dingo” Ngo, and their business partner, Elysa Hoffman, started their vegetable-based Asian and American comfort food business as a pop-up, appearing at vegan festivals and brunches throughout the city. When the opportunity to establish a permanent kitchen and dining space became available, they chose Warrington Avenue and opened in 2017. He acknowledges that they aren’t the first restaurant on the street — Alla Familia and Breakfast at Shelly’s are longtime presences in the community — but Onion Maiden’s vegan dishes were unusual when the business first opened and the concert posters that line the dining room stood out to customers.

“We incorporate music and just like, find names and puns and all this ridiculous stuff that can get people drawn in,” Criswell said. “My favorite reviews are from people who have been like, ‘I’m not vegetarian, but I had a really great meal, a really great time.’”

The menu is quirky: customers can order a hotdog called “Kale Satan” or “Kimmy Gibbler” or a noodle dish dubbed “Come My Pho-Natics.” 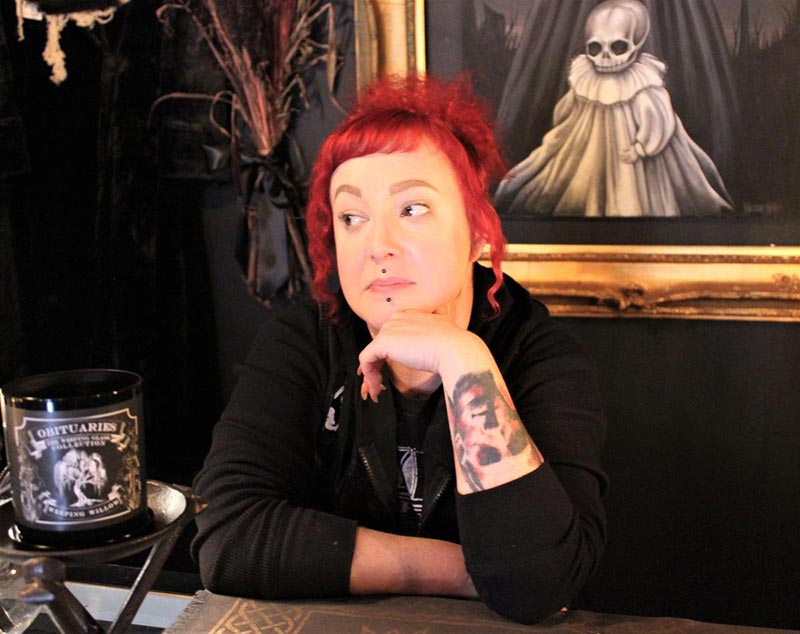 Kelly Macabre Noir, co-owner of The Weeping Glass, says Allentown is a place where niche businesses and take a chance. “These are young, weird, underground, interesting, unique businesses that can’t necessarily afford, right off the bat, because they’re so niche, to be able to afford the $2,700 or $2,000 in rent that’s going on in like, you know, Lawrenceville or Garfield, and those up and coming neighborhoods.”
CREDIT KATIE BLACKLEY / 90.5 WESA
—-

Even those who don’t fit the punk or metal mold have found success in growing Allentown. Down the street in a bright yellow brick building is Leon’s Caribbean Restaurant. Its red, yellow and green walls are a nod to the chef’s Caribbean roots. Leon Rose planted himself in Allentown around the same time as Black Forge after years of working around the country. While the vibe is different (the restaurant blasts Caribbean music and broadcasts NFL games), his son, Leon Jr. says the family could see something in the community.

“[We had] foresight. Seeing a neighborhood that had a lot of potential and anywhere that’s usually not thriving as much always has a turnaround,” Rose Jr. said. 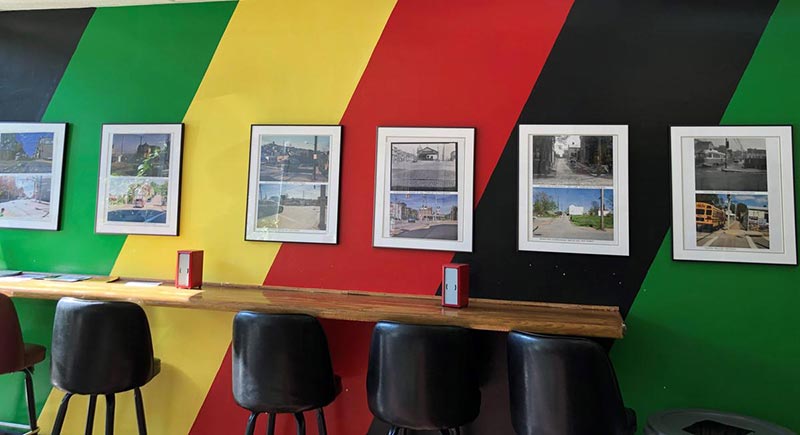 “People ask me, ‘Why Allentown?’ I say, well, it’s a no-brainer. It’s quite simply the best location in Pittsburgh to start a business,” Mader said. “It’s just an entrepreneurial culture … These storefronts are perfect.”

Mader and his partners modeled Dr. Tumblety’s Apothecary retail space off of what they experienced in New Orleans; Vintage fedoras are displayed next to old potion books and clocks, while the smell of incense fills the room. Mader said the dark lighting and array of unusual items are intentional to the atmosphere of the store.

“All you have to do is create the world,” Mader said. “They’ll come visit your world.” 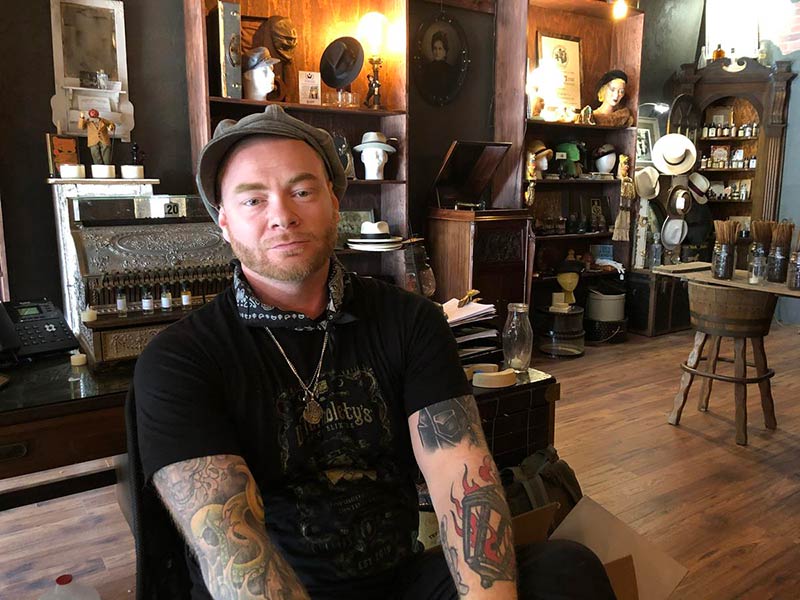 Jesse Mader, of Dr. Tumblety’s Apothecary & Tasting Lounge, says he wanted to open a shop in Allentown because he had grown up in the neighborhood, but also because he saw how poised the community was for growth, especially in its business district.
CREDIT KATIE BLACKLEY / 90.5 WESA
—-

All these new store owners are taking Allentown’s identity further. According to the Hilltop Alliance, the business district’s vacancy rate has dropped to about 15 percent in the past few years. Even though the businesses may have a darker, edgier feel, all the proprietors emphasized that their shops are made for everyone.